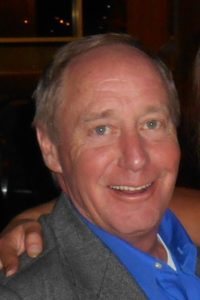 Jeffrey R. “Jeff,” “Shoes” Hayes, age 65 of Kieler, Wisconsin, completed his earthly journey on April 19, 2020, at home.  To honor Jeff’s life, a private family service is being held, with a Celebration of Life being scheduled for a later date.  Burial will be in the Mount Calvary Cemetery in Dubuque, Iowa.  The Tri-State Cremation Center is humbly serving Jeff’s family.

Jeff was born on April 5, 1955 in Dubuque, Iowa, 1 of 8 children to Gerald and Joanne (Rossman) Hayes.  Jeff brightened his work family’s life at AmeriCold for a decade, before spending his last 13 years working in the security department at the Diamond Jo Casino.  He enjoyed life most when he was with family and friends.  He loved the outdoors whether it was pheasant hunting, teaching his girls how to morel hunt, playing backyard games like bean bags, golfing, or just relaxing on the deck with his love, Carolyn.  He was a natural for almost every sport he played, he even earned the nickname “Shoes” because he was an ace at horseshoes.  When he wasn’t enjoying the outdoors, you could find him at his favorite watering hole, the Sandy Hook, with his favorite beverage, a Budweiser, or he could be found in his recliner watching the hunting channel.  Jeff was a genuinely kind soul whose cool and calm demeanor are the framework of the abundance of wonderful memories he leaves behind.  One such memory is when he was struck by lightning, he simply walked it off and said, “I’ve had worse in my eye”.  The world could use more men like Jeff in it, but we trust that the Lord’s timing is as it should be, even if our hearts cannot begin to accept or understand it.  We are grateful for the years our gentle Jeff was given to us and maybe now there will be a few more Werther’s left for the rest of us.  Thank you, Jeff, for living life on your terms and may we use your example to slowly, but surely make the world around us a better place for those who follow behind us also.  God Bless and God Speed!

Those left behind to cherish the memory of Jeff include,

his loving partner of 18 years,

along with countless nieces, nephews, extended family, friends and neighbors.

Jeff was preceded in death by his parents; his sister, Deb Avenarius; and his brother, Jerry Hayes.

In lieu of flowers, a Jeffrey R. Hayes memorial fund has been established.  Expressions of sympathy may be sent to Carolyn Driscoll at P.O. Box 124, Kieler, Wisconsin, 53812, and Kellie Hancock at 320 Summer Drive, Asbury, Iowa, 52002.

Jeff’s family would like to thank all of our family and friends who have provided such an outpouring of love and support during this difficult time.  Jeff’s sudden absence from our physical lives has left many broken hearts and minds behind.  Your consideration and kindness has helped to bring some peace and healing into our days and we cannot thank you enough for the role you’ve so generously played in that.

Online condolences may be shared with Jeff’s family at www.tristatecremationcenter.com

To honor Jeff’s life, a private family service is being held, with a Celebration of Life being scheduled for a later date.  Burial will be in the Mount Calvary Cemetery in Dubuque, Iowa.