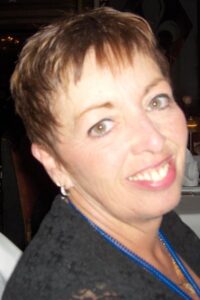 Linda Ford-Johnson, 64, passed away on September 6, 2022, at home surrounded by family.  To honor her wishes, services will not be held at this time.  A celebration of life will be held at a later date.

Linda enjoyed cooking (best ham gravy ever), bowling with her dear friend Irene, traveling with her husband, dancing and spending time with her kids and grandkids.  She was the queen of the 20 minute afternoon nap (I’m just resting my eyes, she would say).  She enjoyed cooking big meals and having all over to the house to share in it.  When asked whether she was going to eat, she would usually reply “I’ve been snacking all day”!

When her and Mike opened Chances R bar in 2007 in Dubuque, she hit the ground running to make a successful go of business ownership.  She was regularly seen behind the bar serving up drinks and good times to everyone until her and Mike’s retirement to Florida in 2011.  Settling in Lakeland, they continued to make friends and enjoy good times, especially at AM Vets Post 35.

She was preceded in death by her parents and her husband, Mike Johnson.

Online condolences for Linda’s family and friends may be left at www.tristatecremationcenter.com

To honor her wishes, services will not be held at this time.  A celebration of life will be held at a later date.