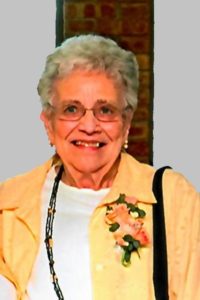 Mary A. Zepeski, age 92 of Dubuque, Iowa, completed her earthly journey on March 7, 2020 at Luther Manor Grand Meadows in Asbury.  To honor Mary’s life, a private family service is being held.  Burial will be in Mount Calvary Cemetery in Dubuque, Iowa.  The Tri-State Cremation Center is humbly serving Mary’s family.

Mary was born on January 21, 1928 in Dubuque, Iowa, a daughter to Leo and Agnes (Wilberding) Reiff. She was a proud graduate of the Immaculate Conception, Class of 1945. Mary began her working career as a telephone operator with Northwestern Bell, but eventually found herself working alongside Norman Zepeski at his Link Art and Photography Studio in Dubuque. The two were soon united in marriage on April 17, 1951 at Holy Ghost Catholic Church. They were blessed with two sons, and 59 years of marriage before Norman was sadly called home in October of 2010. Her heart was broken, never to be completely healed, until she joined his side again in heaven.

Mary found plenty of activities to keep her mind and body busy outside of work. Her faithful devotion to St. Anthony’s Catholic Church was continually on display as she practiced her faith life through a daily walk with her Lord and Savior. She also gave continually of her time and talents as a board member with ARC, and a longtime member of the YWCA. Mary also spent countless afternoons boating on the river with her family, venturing to Colorado on ski trips, and playing multiple rounds of golf each week when the weather was welcoming. Mary and Norman went on several trips to Door County, WI and passed this love on to her family. Her affection for companionship was always evident whether she was gathering with her Bridge Club, or spending some quality time just visiting with her friends. Her grandchildren will remember her as an expert euchre partner, Hawkeye sports aficionado, and steadfast source of conversation and honest advice. Mary cherished gathering with relatives and seeing the family she helped to nurture and build. We will love and miss Mary with heavy hearts moving forward, but we have faith that she is now walking humbly with her Lord. Thank you, Mary, for the life lessons and stories, may the peace you have searched so diligently for, finally be yours!

Those left behind to cherish the memory of Mary include,

Mary was preceded in death by her parents; her husband, Norman Zepeski; her son, Jay Zepeski; and her sister, Eulaia (Richard) Unsen.

In lieu of flowers, memorials may be given in Mary’s name to Luther Manor Grand Meadows, or Hospice of Dubuque.

Mary’s family would like to extend a sincere, enormous thank you to the nurses and staff at Luther Manor Grand Meadows, and Hospice of Dubuque, for all of the professional and compassionate care they have given to Mary, and her family.  We would also like to thank all of Mary’s dear friends over the years who have provided more love and support than anyone will ever know.  Mary’s life was abundantly full because of those who gave generously of their own time and energy and we cannot thank you enough for simply being you.

Online condolences may be shared with Mary’s family at www.tristatecremationcenter.com

To honor Mary’s life, a private family service is being held.  Burial will be in Mount Calvary Cemetery in Dubuque, Iowa.

3 comments on “Mary A. Zepeski”