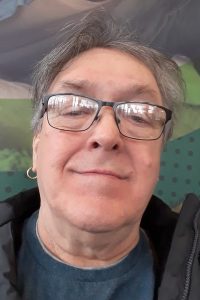 Terry E Smith, age 66, of Dubuque, Iowa, passed away on July 28th, 2020.  Born in Freeport, Illinois on September 25, 1953, Terry was one of three children to Delmar and Nancy (Shoemaker) Smith, along with sister Jenny and brother Mark.

Terry was married twice – first to Diana (Pluym) Smith and until his passing, to Liz (Sullivan) Smith – and produced four children, all of with whom he established a deep and lasting bond until his final days.

In his personal life, he was a proud and dedicated supporter of his two favorite sports teams – the Boston Celtics and the Chicago Bears – and he spent many hours shooting pool, maintaining a collection of knives and swords, and reading.  Another major source of joy for Terry was playing guitar and listening to his near-endless supply of Bob Dylan records. Terry also enjoyed entertaining others with his ability to speak backwards.

As his close friends, family members, and even acquaintances could attest to, Terry remained a genuine and unique person until his end and was someone who found ways to embrace life each day.

Those left behind to cherish Terry’s memory include:

his aunt and uncle,

along with his many close and long-time friends.

For the rest of our collective lives, when we look to the sky, may we be reminded of his spirit and the warmth and love Terry provided to all of us.

Terry was preceded in death by his parents and brother-in-law, Wilson Hartlieb.

Terry’s family would like to thank the doctors, nurses, and staff at Mercy One Hospital in Dubuque, Iowa, for all of their professional and compassionate care.

Online condolences may be shared with Terry’s family at www.tristatecremationcenter.com.

To honor Terry’s life, a private family service is being held at a later date.