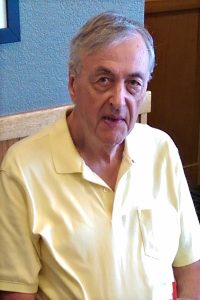 Thomas John Roseliep, age 77, of Dubuque, Iowa, passed away on October 19, 2020, at home. A private family service will be held to honor Tom’s life, in accordance with his wishes. Burial will be at Mount Calvary Cemetery in Dubuque.

Tom was born on July 23, 1943, in Dubuque, a son to Louis John and Cathryn Louise (Heim) Roseliep. He graduated from Loras Academy, and Loras College with a degree in History. He also earned a degree in Journalism from Iowa State University.

Tom worked as a journalist first in Minnesota and later for outlets in the Tri-State area, including the Telegraph Herald. Tom also worked for the US Postal Service in Dubuque, and for Divine Word Theological Seminary. In 1992 he joined his brother James L. Roseliep at Security Products of Dubuque, where he stayed for 28 years.

Tom was a devout Catholic and attended mass every week. He also paid visits to nuns, priests, and fellow parishioners within the Dubuque Catholic family.

Tom was a devoted listener to old-time radio Sunday nights on KDTH. He also listened to classical music on KSUI, and made time for Cubs and Bears games. He was an avid reader and museum-goer, and took in plays, musicals, and live music. He enjoyed strolls on the Mississippi Riverwalk, but could most often be found at Lock & Dam No. 11 on warm afternoons, watching the tows and river traffic.

Tom was an inveterate communicator in his signature ALL CAPS text messages, as well as in daily emails, and particularly and most memorably in snail-mail envelopes full of news clippings, cartoons, and notes. Whenever a family member, friend, or old North End acquaintance moved, Tom’s letter would be the first to greet their arrival.

Tom was preceded in death by his parents.

Online condolences may be shared with Tom’s family at www.tristatecremationcenter.com

A private family service will be held to honor Tom’s life, in accordance with his wishes. Burial will be at Mount Calvary Cemetery in Dubuque.