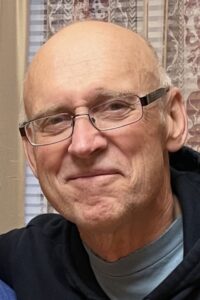 Gary was born in Sauk Centre, MN, on January 28, 1951, the first child of Ralph and Marcella (Sand) Fichtinger.  He enjoyed growing up on a dairy farm with his siblings that followed, Pat, Gayle, and Mark. One of his greatest thrills was tinkering with and building gadgets from the scrap metal and old machine parts he found around the farmstead. In his high school years, he became interested in cars and car engines. To the amazement of friends and family, he managed to completely restore a 1950 Ford.  When it was time to paint the car, the only color available on the farm was John Deere green (so fitting!). His interest in engines and mechanics led him to enroll at St. Cloud State University to study engineering, eventually completing his B.S. in Mechanical Engineering at the University of Minnesota.

After being hired by John Deere, Gary, wife, Ann (Ohmann), and young son, Michael, moved to Dubuque in 1974. He enthusiastically began work on the forestry line, designing components for log skidders.  He was a talented and well-respected engineer, colleague, and friend to many at John Deere.

In 1976, the growing family moved across the river to Wisconsin with a new son, Paul, and twins, Leah and David, on the way.  They purchased a 5-acre wooded lot and started building a self-designed geodesic dome house.  Gary spent nearly two decades building the dome with everyone in the family spending evenings, weekends, and summer breaks pitching in.

In 1999, Gary had an opportunity for a work assignment in Germany, helping to design a new machine for Deere.  He and Ann moved to Jaegersburg, where they lived for two years enjoying the German culture and traveling around Europe with their dogs, Schatzi and Woody.

Gary retired from John Deere in 2012 and turned his focus to the many projects he had dreamed of over the years.  He and Ann purchased his great aunt and uncle’s house which was part of the original Fichtinger homestead farm near New Munich, MN.  The old farmhouse needed a lot of remodeling work to bring it back to life, which Gary dove into with enthusiasm.

Gary’s favorite pastimes were fishing and camping. He always looked forward to the annual Boundary Waters trip which he and his sons, and later grandkids, would take.  He loved getting away in the wilderness, catching and frying fish, and laying out under the stars.

Gary loved learning new things, including baking. He mastered a recipe of no-knead bread that is fondly called “Opa Bread” by his family and “Gary Bread” by his friends.

Gary had a passion for life, talking shop, solving problems (often other people’s), and having a good laugh at the end of the day.  He will be deeply missed by his loving family and many friends, for whom life has grown dimmer with his passing.  We love you Gary, Dad, and Opa!

Gary was preceded in death by his parents, Ralph and Marcella Fichtinger.

Gary’s family would like to extend a heartfelt thank you to the nurses and staff at Hospice of Dubuque.

Online condolences for Gary’s family may be left at www.tristatecremationcenter.com