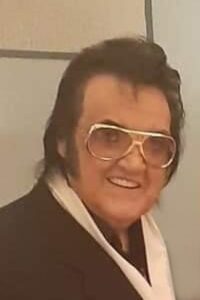 Arthur “Artie” Edward Mentz, 77, of Dubuque, Iowa, passed away very unexpectedly on April 3, 2021. Artie was born May 19, 1943 to Rosemary J (Hedley) and Arthur G. Mentz. He earned the nickname “Elvis” at age 13, started performing in bands at local venues, age 15-16, and was able to turn his passion and love of entertaining into a lifelong career, performing all over the United States. Joining him on this adventure would be his partner and soul mate, whom he would vow to “Kiss Each Morning For a Million Years” Elly Mae (Mueller) Mentz, married July 16th, 1968. They have 2 children, (Lori & Aron) and together their family made over 30 trips to Memphis for the annual Elvis Week celebration and candlelight vigil, where he would form many lasting friendships, with people from all over the world.  Artie’s entire family took part in his performances. His wife made his jumpsuits and scarves, his daughter joined the band as his right hand, and his son would often join him singing on stage. Over the years, he earned many accolades – including induction into the Iowa Rock’N’Roll Hall of Fame in 2003, and induction to the International Elvis Tribute Artist Hall of Fame in 2019. Artie was the only ETA (Elvis Tribute Artist) member ever to meet Elvis’ father, Vernon Presley. The photograph of their meeting was one of Artie’s most cherished memories. He graced the covers of numerous magazines and newspapers, including USA Weekend magazine in 1987, and appeared on the Oprah show in 1988 and 1990. ( Once, with his son, Aron Elvis ) Artie was crucial in the making of three Elvis documentaries – Elvis: His Memory Lives On, Rock & Roll Disciples, and Mondo Elvis.  He was ranked one of the top 10 Elvis impersonators by Rolling Stone magazine in 1988, and was also featured in an MTV music video. Honestly, there are just too many to mention… Although Elvis was his most influential idol, he was also an avid Gene Simmons (KISS) fan.  He was very proud of the band he formed called “Artie & the Pink Catillacs”, a band his daughter would join, and together they would help it become one of the best rock and roll bands in the area. He played in this band until 2012, when he would somewhat retire, but still keep busy as an honorary judge for Ronnie Craig’s Elvis Explosion Contest, in LaCrosse, WI. But you didn’t just get music when you went to see them, Artie had a knack for history as well, for every song they performed, he could tell you who recorded it, and what year, without hesitation. And when he wasn’t performing, he loved to spend time with his family.  Not only did he love his music, he also loved cars. From his Corvettes, to his Lincolns, to his vans, or anything else that might come along – he always made sure it looked as if it just rolled off the showroom floor. Artie loved his fans as much as they loved him. He may have been known to many as “Dubuque’s Own Elvis”, but his most important titles were: Husband, Dad, and Bompa…. The world may feel like it has lost an icon, but we have lost part of our world!

From the love of his life, “To everyone else, he was their Elvis. To me, he was my Artie.”

Artie was preceded in death by his father, Private Arthur George Mentz U.S.Army, his mother, Rosie, step-fathers Michael McDermott, all of Dubuque, and Harlan Friedman, of Luxemburg, IA, and brothers Patrick McDermott and Michael McDermott. He is survived by his wife and the love of his life, Elly, daughter, Lori Mentz and son, Aron (Kelsey) Mentz, sisters Denice (Roger) Bergfeld, Diane Conley, and Debbie (Larry) Lyons. He was “Bompa” to 5 grandchildren, a nickname given to him by the oldest – Benita (Owen) Holmes, Daniel Mentz, Thomas Mentz, Isabella Mentz, Violet Mentz, and great-grandchildren Joel Schroeder and Hayden Holmes.

To honor Artie’s life, a Mass of Christian Burial will be held on Wednesday, May 19, 2021, at 10:30 a.m. at the Church of the Resurrection, 4300 Asbury Road in Dubuque, with Rev. Phil Gibbs officiating.  The family asks that please no flowers and requests privacy during this time.  As Elvis would say, ” TcB” (taking care of business)

Online condolences for Artie’s family may be left at www.tristatecremationcenter.com