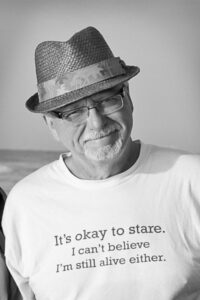 David L. “Dave” Feipel, age 68, of Dubuque, IA, completed his earthly journey on May 29, 2022, at home surrounded by his loving family. To honor Dave’s life, a private family Celebration of Life is being held. The Tri-State Cremation Center is humbly serving Dave’s family.

Dave was born on April 19, 1954, in Dubuque, IA, a son to Donald and Lela (Close-Tigges) Feipel. Dave began developing his lifelong character traits from a very early age, and over the years came as close to perfecting the term “a man among men” as you could ever hope to meet.  His love and devotion for his family and friends were legendary, but he also understood that taking himself or life too seriously was not going to be part of the equation if true joy was going to be found in this world. Dave’s commitment to his career and volunteer positions over the years was a true testament to a man who understood that he was more than a mere member of our community, but rather had a responsibility to invest within the community around him the time and talents which he was gifted with.  He was the manager of Jaeger Hardware for many years and anyone who stopped in was sure to spend more time visiting than shopping if Dave was at the desk.  He later moved into the hardware department at Theisen’s and spent many years there sharing his skills and knowledge with the new team around him. His free time consisted of spending time in his woodworking shop at home, and immeasurable hours with the Colts Drum and Bugle Corps where he sat on the board and was the Cadets Director, with AYSO Soccer as a formidable coach, and the head woodsman for Simple Treasures. His vast service record was only amplified by his years with the Noon Optimist Club. He was a Past Distinguished President, 4-time Lt. Governor, Iowa District Convention Chairman, various Committee Chairs, sat on the Storybook Children’s Zoo board, and was a faithful and proud Life Member. Dave had a heart for others, and it was clearly abundant when all could easily witness his words and actions coincide without hesitation.

Dave leaves behind a legacy which will continue to serve as a solid measure for anyone desiring to leave the world in better shape than when they arrived. But, at the end of the day, Dave was a family man through and through. His unwavering love for his beautiful bride, Doris Pluym, along with his daughter, Melissa, and her family, was where he found his greatest joy in this life.  Any time he could spend with them was considered to be not only quality time, but some of the best hours of any day he had. It’s beyond difficult to imagine a world without Dave’s zest for life residing alongside us, but we also watched as his courageous battle with cancer was taking a greater toll than Dave was willing to surrender. We will search and find peace in time within the wonderful memories which he leaves behind now and are reluctantly grateful that his earthly struggles are now behind him. Thank you, Dave, for teaching us so many important life lessons.

Those left behind to cherish the memory of Dave include,

his loving wife of 44 years,

his 18 nieces and nephews,

along with countless extended family, friends, and neighbors.

Dave was preceded in death by his parents; his step-father, Art Tigges; his sister, Beverly “Sis” Kieffer, and his mother-in-law, Violetta Pluym.

Dave’s family would like to thank Dr. Chris Stille, Dr. Engelman, primary nurse Kristin Schroeder, the nurses and staff at Hospice of Dubuque, and all of our family and friends who so generously shared both your professional and compassionate care with Dave and his family. All of the love and support you so graciously shared helped us all through some of the most difficult days we’ve ever had to face. There are simply not words to express how grateful we are for each and every one of you.

Online condolences may be shared with Dave’s family at www.tristatecremationcenter.com

To honor Dave’s life, a private family Celebration of Life is being held.