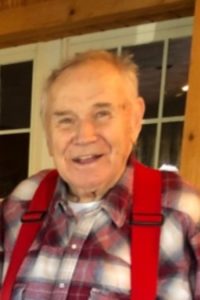 Earl Frank Moore, age 87 of Sherrill, Iowa, completed his earthly journey on January 31, 2020 at home.  To celebrate Earl’s life, a reception for family and friends is being held on the afternoon of Saturday, February 8, 2020 at The Barn, 5090 Sherrill Road, Sherrill, Iowa.

Earl was born on April 15, 1932 in Dubuque, Iowa, a son to John and Buelah (McNamer) Moore.  Educated in a one room schoolhouse, Earl learned the value of hard work and following his dreams early in life.  He passed those values on to his children as well as his skills in all the trades for which they are eternally grateful. Earl served in the Navy as part of the Seabees. Upon discharge, he tried his hand at several different businesses until he found his true passion…working in the food industry. That led him to open a meat processing business which served the community for over 50 years.  Earl was also a devoted and dedicated singer who would fill the room with his favorite songs.

Everyone who knew and loved Earl finds themselves holding broken hearts today after his sudden passing.  The abundance of memories he leaves behind will surely help to mend the wounds we possess until we all get to hear him singing joyfully among the heavenly choirs of angels in time.  Thank you, Earl, for being you and for never giving up on your dreams.

Those left behind to cherish the memory of Earl include,

Bob (Jeannie) Moore of Kendallville, IN,

and Joyce Moore of Dyersville, IA ;

Earl was preceded in death by his parents, John and Beulah; his step-father, Vince Loeffelholz; his sister, Donna (David “Bud”) Duve; and his brothers, Donald Moore, Jack Moore and Richard Moore.

Earl’s family would like to thank everyone who has compassionately provided love and support to us during these difficult days.  Your kindness is appreciated more than you know!

Online condolences may be shared with Earl’s family at www.tristatecremationcenter.com