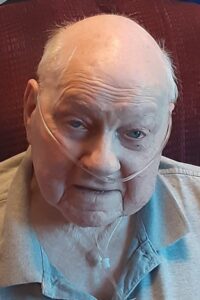 Eldon Charles Glick of Galena passed away on July 28, three days after his 93rd birthday.  Eldon was born July 25, 1928, to Walter and Edith (Schaber) Glick. He graduated from Galena High School in 1946 and he married Carol (Westemeier) Glick in 1956.  Together they had a daughter, Nancy (Glick) Lewis.  Eldon worked as a masonry superintendent most of his early life and he was a member of the Bricklayers Union #31 for over 50 years.  After his bricklaying years, Eldon became a downtown business owner and eventually becoming the President of the Galena Chamber of Commerce, an officer of the BlackhillsTourism Council, and was elected Vice President of the Illinois Tourism Council. Eldon’s motto was “Remember the Past, Look to the Future”.  Eldon was a member of the Galena City Council and his idea of earmarking 10% of each year’s hotel/motel tax for state tourism promotion became law.  Eldon worked hard for tourism in Galena and took every step necessary to keep Galena in tack to preserve the rich heritage of its priceless architecture.  As a hobby, Eldon became interested in antiques and especially Galena Pottery. He opened an antique store on Main Street in Galena and later one in Woodbine.  At one point in time, his store was both the oldest and newest store on Main Street when his daughter and her husband took ownership.  Eldon was an active member of the Elks for over 70 years and was a Past District Deputy, Grand Exalted Ruler.

Eldon is survived by his daughter Nancy Lewis and two granddaughters: Natalie Berger and Simina Lewis.  Eldon was preceded in death by his wife, parents and four brothers: Wayne, Marlan, Clifford, and Elsworth.

The family would like to thank Hospice of Dubuque, Dr Christ and family and friends for their wonderful care and support.  A graveside service will be held at a later date.  Tri-State Cremation Center is in charge of arrangements.

A graveside service will be held at a later date.