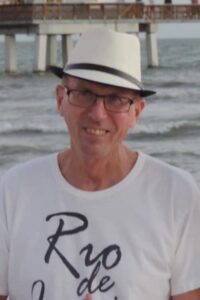 Francis J. “Frank” Schumacher, Jr., age 72, of Cape Coral, FL, formerly of Dubuque, Marshalltown, and Des Moines, IA, was called home, into the grace filled arms of his Lord and Savior, suddenly on Sunday, October 31, 2021, at the Hope Hospice House in Cape Coral, while surrounded by his loving family.  To honor Frank’s life, his Celebration of Life will be held on Saturday, November 27, 2021, from 11:00 a.m. until 2:00 p.m., at Steeple Square, 101 E. 15th Street in Dubuque, where his family and friends are invited to join in food, fellowship, and sharing in his testimony of a life well lived.  Frank’s memorial service will be held at 2:00 p.m. at Steeple Square, with Pastor Jack Redmond officiating.  The Tri-State Cremation Center is humbly serving Frank’s family.

Frank was born on February 24, 1949, in Dubuque, IA, the youngest son of Francis Joseph and Virginia Jean (Boland) Schumacher, Sr.  He grew up in a loving home where his older sisters almost immediately sprang into action and kept him right under their wings.  He graduated from Dubuque Senior High School, Class of ’67, and began to develop his dreams and life’s ambitions quickly to see what this world had to offer.  Frank enjoyed art and music from an early age and soon earned the nickname “Zappa” as he ventured into adulthood.  He met his soul-mate, Pamela “Pam” Breiner, aka “Sunshine” or “Pamdabear”, and the two have been inseparable ever since.  They have been blessed with 52 wonderful years of marriage together and decided from the very beginning that they were going to do everything that they could to conquer any evil that dared to present itself before them.  They began by taking in unwed moms to provide them with a safe and loving environment where they could have their babies, provide them with an opportunity for a better life, and later return home with none the wiser.  Soon, they found themselves taking in infants directly who needed a loving home until a permanent one could be found, and finally moved into the Foster Parent role where they eagerly welcomed 88 kiddos, over 36 years, in need of a loving, secure, and nurturing home to be an immediate part of the family.  Two of these children would end up being legally adopted, but all of them were virtually adopted with many of them still calling Frank “Dad” to this very day.

Frank spent the first 20 years working to support his family at John Deere Dubuque Works.  He decided that he would like to move into a management position and began taking night classes at the University of Dubuque.  In true Frank fashion, he not only received his Bachelor’s degree, but also graduated Magna Cum Laude and won the Wall Street Journal Award just for good measure.  The job market was a little difficult in the late 80’s, so unwilling to settle, Frank found a new home with Fisher Controls in Marshalltown.  He made many new friends there, but continued to wrestle with the relentless desire to climb a little higher yet.  Frank began working on his MBA at Drake University and once completed, was offered to join the team at Bridgestone Firestone in Des Moines.  Over his years there, he moved through a few different positions, but in the end made it all the way to the Lab Manager position before finally deciding that it was time to retire and enjoy a little more free-time and some warmer weather.  Once Pam retired from counseling, they began spending their winters in Florida.  This had always been a dream of Frank’s and he was all too thrilled when he “accidentally” purchased a home in Cape Coral, as a special gift for Pam on Valentine’s Day, making their winters there a permanent vacation.

When Frank wasn’t busy providing for his family, saving children, and climbing the executive ladder, you could regularly find him challenging the evils in the world head on.  He and Pam were founding members of Hope E. Free Church in Dubuque, the Marshalltown E. Free Church, along with Point of Grace Church and South View Church in Des Moines.  They made mission trips to New Orleans and Rio de Janeiro, where they would fervently and humbly preach the gospel of Jesus Christ in the favelas to all who would listen.  On one of their trips to Rio, they even had the distinct pleasure of working on the golf course greens during the Summer Olympics.  They also participated in Operation Friendship Force where they would invite inner-city kids from Chicago to come spend a few weeks during their summer breaks on the family farm, and they also took in exchange students from South Korea and Africa so that they had a comfortable home to reside in while working on their higher education at U.D., while simultaneously exposing his family to other cultures.  Frank was once awarded the United Way Volunteer of the Year and was also awarded more than enough Idea Sam checks at John Deere to purchase at least one of his vehicles.  They were also an integral part in the development, organization, and implementation of the first DubuqueFest and Rock-N-Roll Rewind festivities, which continue to be annual events to this day.  Frank always enjoyed traveling, and the educational experience that came along with it, and always made sure that all of the children in their care were able to visit the landmarks and sights around the U.S., Canada, and Mexico, at least three trips every year.  He was also very proud that their home had made it into the Tour of Gardens in Des Moines after the investment of countless hours of gardening and landscaping which Frank and Pam enjoyed doing together.  Besides gardening, Frank also enjoyed snowmobile racing, snow and water skiing, an afternoon on the motorcycle, or a relaxing day out on the kayak.  Frank both savored and embraced life along with all of its majesty and intentionally finding himself meandering into a dull day was never going to be an acceptable outcome.

Now, before you think that Frank was more than a mere mortal, let’s kindly remind you that he once paid good money to have his adoring wife pushed out of a perfectly good airplane with a parachute on her back.  He strategically led his boys into a dead-end triple black diamond run in Colorado with the most mischievous grin you could imagine once they realized what he’d done.  He also forced his boys to write poetry at home, and then informed them that they would have the distinguished honor of reading their poetry out loud to the attendees down at one of the Old Jailhouse Poetry Evenings.  And, if some fortunate youngster knocked on his front door selling a coupon book, you could be sure that everyone inside the house was not going to get to eat at any restaurant, enjoy any activity, or get a haircut at any place that wasn’t in that book for the next 90 days.  For Shame Frank…For Shame!

It’s beyond our comprehension to understand how we will be able to navigate this world moving forward without our fearless leader and hero.  He faithfully instilled the value of being an independent thinker into all of his children, never being afraid to rub against the grain whenever necessary, but with the constant reinforcement that we should always remain aware of the higher purpose and plan that is actually at play in this life.  Frank made the world a better place at every turn and did it so naturally that it almost appeared to be effortless.  His affinity to continually grow, develop, and nurture one’s education and knowledge was based purely on the reality that information was one of the few things in this life that could never be taken away from you.  Frank had a working personal relationship with Jesus Christ and made sure that all of his loved ones did as well to assure that we would all be able to spend eternity right alongside him, and for that we could not be more blessed.  We love you more than you know, we miss you with all of our being, and we are forever grateful that the Lord saw fit to trust all of us into your guiding hands while He was willing to share you with this world.  Thank you, Frank, for every ounce of love you so generously shared, for every lesson you so diligently taught, and for leaving so many lives behind that are undeniably better off simply because you were an active and participating part of them.  God bless you Frank and definitely enjoy your eternal peace until we all meet again.

Those left behind to cherish the memory of Frank include,

his beautiful bride of 52 years,

along with countless foster children whom he loved no less, and fought for even more;

Frank’s family would like to sincerely thank all of the doctors, nurses, staff, family, and friends who have helped Frank fight the good fight over these recent years.  His battle with cancer was where the first line was drawn, only to find out that a stroke was awaiting him right over the horizon.  All of the amazing and excellent care, love, encouragement, patience, and support that he received made a remarkable difference in his attitude, courage, and strength.  We cannot thank every single one of you enough and please know that you played a very important role in each and every battle he fought and won.  May God bless all of you for your unceasing kindnesses!

Online condolences may be shared with Frank’s family at www.tristatecremationcenter.com