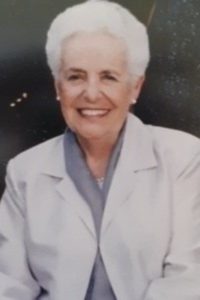 Georgia Peter Sakas peacefully passed away on Saturday, January 18.  She will be interred at the Guttenberg City Cemetery and the family will have a private remembrance later this year.

Georgia was born September 8, 1926 in Rockford, Illinois to Peter & Helen Retsinas. She was the fourth of six children in a close-knit Greek family.  She was a beautiful little girl who was gifted with a superb singing voice and began performing as a child.  Georgia was the solo opening act for the Three Stooges at the Orpheum Theater in Rockford and the Stooges were so impressed with young Georgia they used her in one of their skits.  After high school graduation she continued singing and starring in performances while attending Cornell College in Mt. Vernon, Iowa where she received a Bachelor’s Degree in Music.   She married Basil Sakas in 1952. Basil and Georgia moved many times with Basil’s jobs before settling in Ft. Collins, Colorado in 1968.  They were blessed with two wonderful children, Lisa and Peter.

Georgia was an elementary music teacher, substitute teacher, choir director, home maker and volunteer.  She and her husband were 40+year members of the Ft. Collins Golf & Country Club.  Realizing early on “if you can’t beat ‘em, join ‘em” she learned to play golf and loved it, playing in the ladies leagues for many years.

Georgia was a devoted wife, mother and YiaYia (grandmother) and enjoyed caring for her family in many ways.  She was a great cook and was known for her pies and Greek pastries which she shared with friends and neighbors, especially at the holidays.  After Basil’s passing in 2006 she moved to Dubuque and lived with her son and daughter-in-law, Peter and Ginger Sakas.  While in Dubuque she made new friends, volunteered at the National Mississippi River Museum & Aquarium, and spent time at Cozy Corner Adult Daycare where she made a best friend in Arlene. Lastly, she made Luther Manor her home where she enjoyed the music entertainment, activities and friendly staﬀ.  She was fortunate to have a sweet roommate Diane, who became a special friend.

She will forever be remembered for her beautiful smile, humor and love of people. No one ever left her presence without a big warm hug.

Georgia is survived by her daughter Lisa Wolkin (Doug) of Parker, Colorado and her son Dr. Peter Sakas (Ginger) of Dubuque.  Her grandchildren, Sydnee Sakas and Elly Ahr (Artie) of Dubuque, Avery Hadzi (Jean), Michael Sakas, Ben Sakas and Zane Wolkin all of Colorado.  Two great grandsons Arthur and Wilder Ahr of Dubuque.  She is also survived by her sisters-in-law Nora Retsinas of Tucson, Arizona and Elsie Sigalos of Chicago, Illinois and many beloved nieces and nephews.

She was preceded in death by her husband Basil, her parents and parents-in-law, her siblings and brothers and sisters-in-law.

To honor Georgia’s life, a private family service will be held later this year.  She will be buried in the Guttenberg City Cemetery.