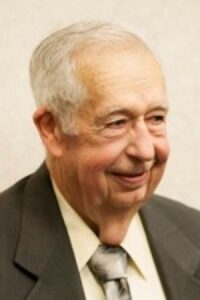 Gustave J. “Gus” Wolff, age 89, of Dubuque, Iowa, died at home on February 2, 2021, surrounded by his loving family.  To honor Gus’ life, a Zoom memorial service will be held for his family and friends on Saturday, February 13, 2021.  Please feel free to contact the family for more details.  The Tri-State Cremation Center is humbly serving Gus’ family.

Gus was born on September 6, 1931, in Burton, Kansas, son of John and Cora (Hunt) Wolff.  His parents moved to Dubuque before he was of school-age.  He graduated from Dubuque Senior High School in 1949.  He met his wife Elenore, in high school, and they later married on August 22, 1953, and in subsequent years raised 2 sons and 2 daughters.  He graduated from the University of Dubuque in June 1956 with a Bachelor of Science degree, and began his career as a science teacher later that year in New London, Iowa, then in 1958 moved back to Dubuque to continue his career first with the Science Department at Dubuque Senior High School, and later at Jefferson Junior High School.  He retired from teaching in 1992, but continued with and expanded his house painting business for many more years.  He also enjoyed traveling even more extensively with Elly, around the world, in fact, as he loved learning about the world and its peoples and cultures.

Besides his teaching career, Gus also enjoyed many other part-time jobs and activities.  For instance, he worked many summers as a lifeguard and manager at the former Municipal Pool (now Sutton pool), and for many winters worked with the outdoor ice rinks in Dubuque.  These were perfect jobs for him, as he was a skilled swimmer, high-board diver, and was a talented skater. He also volunteered as a counselor for the Summer Science Camp program, and with the Dubuque County Historical Society, and was a Board Member of the Dubuque Teachers’ Credit Union for many years.  Some of his other favorite activities were tending his rose garden, playing handball, and playing cards, cribbage, board games, and dominoes with his family.

Besides being a teacher, he viewed himself as a student of life and was always desirous of learning new things.  Thus, in 2013, he began a serious study of the Bible, which led to his decision to dedicate his life to the greatest Teacher of all, Jehovah God, and was baptized in 2014 as a disciple of Christ Jesus, beginning his ministry with the South Congregation of Jehovah’s Witnesses in Dubuque.

Although in the end, Gus’ physical heart gave out on him, his figurative heart was as strong as ever, for he loved his family, friends, students, and people in general with all of his heart.  He showed by example that love was always more important than material things.  For him, it was always a loving team effort with Elly in raising their 4 children.  And he gave his children the greatest gift a father could give them, that of loving their mother.  Gus was truly blessed with a full and abundant 89 years, spending it with those who loved him.

Those left behind to cherish the memory of Gus include,

his loving wife of 67 years,

his 4 children that he adored,

along with nieces, nephews, and numerous extended family members

Gus was preceded in death by his parents, parents-in-law Keith and Evelyn (Mehl) Montgomery, and a brother-in-law, Kenneth Montgomery.

Gus’ family would like to thank all of the doctors, nurses, and medical staff who gave Gus kind and compassionate care during these difficult last few months.

Online condolences may be shared with Gus’ family at www.tristatecremationcenter.com

To honor Gus’ life, a Zoom memorial service will be held for his family and friends on Saturday, February 13, 2021.  Please feel free to contact the family for more details.