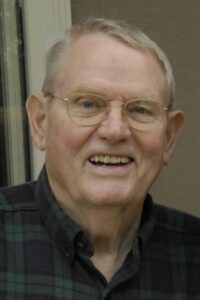 The son of Donald D. and Marjorie A. (Corson) Herron, James was born in Waterloo, Iowa, on July 11, 1935. He moved to Dubuque with his family in October 1947 and graduated from Dubuque Senior High School in 1953. Following graduation, he served in the U.S. Marine Corps from September 1953-September 1956 and spent one year in Korea with the First Marine Division. After his release from active service, he returned to Dubuque and began working at John Deere Dubuque Works and attended the University of Dubuque and Clarke College. He was united in marriage with Susan J. Pierce on August 1, 1959, at Grandview Avenue United Methodist Church. In 1987, he retired from John Deere after 31 years of service.

Jim loved being with his family, and he also enjoyed many hobbies. He was an avid fisherman who crafted original fly rods for his family, he loved to garden, and he especially enjoyed the outdoors. He was very artistic taking up watercolor painting after retirement and his lifelong passion for woodworking resulted in beautiful heirloom pieces for his children and grandchildren.

He was a member of Grandview United Methodist Church, American Legion Post #6 and a life member of the First Marine Division Association. He was always extremely proud that he served his country as a Marine.

James was preceded in death by his parents.

There will be no public visitation.  A private family memorial service will be held at Linwood Cemetery, where full military honors will be accorded by the Dubuque American Legion, Post #6.

In lieu of flowers, memorials can be sent to the Dubuque Humane Society or Hospice of Dubuque.

The family wishes to thank Kelly Decker with Dubuque Hospice, as well as the nurses and staff at Hawkeye Care Center for their excellent care and compassion.

Online condolences for Jim’s family may be left at www.tristatecremationcenter.com

There will be no public visitation.  A private family memorial service will be held at Linwood Cemetery, where full military honors will be accorded by the Dubuque American Legion, Post #6.