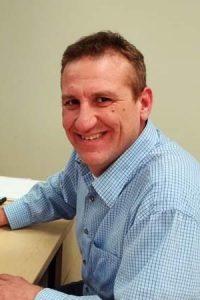 Michael S. Horn, age 53, of Guttenberg, Iowa, formerly of Dubuque, completed his earthly journey suddenly on January 16, 2021, after injuries sustained in an automobile accident.  To honor Mike’s life, his Celebration of Life will be held on Saturday, February 6, 2021, from 11:00 a.m. until 2:00 p.m. at the Eagle’s Club, 1175 Century Drive in Dubuque.  The Tri-State Cremation Center is humbly serving Mike’s family.

Mike was born on July 15, 1967, in Independence, Iowa, to his proud parents, Dennis and Marcia (Sherrets) Horn.  He spent his formative years in Independence, but the family eventually moved to the Guttenberg area where Mike made many lifelong friends which culminated into an abundance of lifelong memories.  He was a friend to all and was quite active in football, baseball, and basketball throughout his school years.  Mike was a graduate of the Guttenberg High School Class of ’85, and went on to UNI to work on a degree in business.  Mike spent the majority of his working years in auto sales and had many great accomplishments throughout his career. Through Mike’s eyes, his greatest legacies are his 2 sons, Brandon and Austin, whom he loved dearly. Moving next to being a “Papa”, Mike always enjoyed taking Leslee out for ice cream.  Mike continually maintained a devoted relationship with his mother, Marcia, and was always up to bringing a smile into his sister, Autumn’s day.  Mike even made it a priority to drop off his niece, Ryann, at school when time allowed.  Mike was a caring, fun-loving, charismatic man who was beloved by all. Mike enjoyed his rides with Cooper, his time on the river, and was a good storyteller. He was also an avid Cubs and Bears fan who thoroughly enjoyed going to the games with his crew. Family and friends are beyond heart-broken today with the sudden absence of Mike from our daily lives.

Those left behind to cherish the memory of Mike include,

Mike was preceded in death by his father, Dennis Horn; his step-father, Skip Hall; and his grandparents, Leonard (Joyce) Sherrets and William (Viola) Horn.

Mike’s family would like to thank all of our family and friends who have offered their compassionate concerns and sympathies during this difficult time.  Your kindnesses mean more than you could ever know.  Thank you!