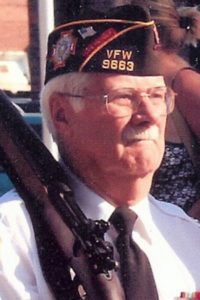 Paul J. “Jack” Papin, age 82 of Dubuque, Iowa completed his earthly journey on July 20, 2019 at home, surrounded by his kids and wife.  To honor Jack’s life, a private family Celebration of Life will be held at the Tri-State Veterans Memorial Plaza at a later date. The Tri-State Cremation Center is humbly serving Paul’s family.

If you don’t know “Jack”, let me tell you the rest of the story….

Jack was born on October 24, 1936 in Prairie Du Chien, Wisconsin, a son to Raymond “Ray” Paul and Madeline Catherine (Duehr) Papin, owners and operators of Hawkeye Trailer Court.  Jack’s patriotism to both his country, and moral beliefs in defending our constitution were instilled in all aspects of his core family values, service to his country and work ethics; no matter where he went and who he encountered, you knew where he stood.

After graduation from Dubuque Senior High School, Jack honorably served his country with the United States Navy during the Korean War.  He continued to carry his core values and patriotism forward throughout his entire life and was not only a longtime member of the Dubuque American Legion Post #6, but he also had the privilege of serving as the Sr. Vice Commander Adjutant with the VFW Post #9663.  He proudly received the “Veterans of Foreign Wars” award of commendation for Meritorious and Distinguished Service in furthering the aims and ideals of the Veterans of Foreign Wars of the United States on December 1, 2018.

Upon completing his service to our great nation, Jack began his 40 year civilian career with Dubuque’s Local #125 Plumbers & Steamfitters Union as a Plumber/Pipefitter.  He worked both locally, and traveled many years on the road across the span of the United States.  In addition, he devoted his time to the Dubuque City Plumbing and City Mechanical Boards for many years sharing his wealth of knowledge and giving back to his community.

Those of who knew Jack, realized he loved to tinker on many projects and involved either himself and/or his children in other activities that he was passionate about.  His love for building and construction, mechanical – rebuilding engines, aerospace, kids sport activities, veterans’ affairs, shooting, hunting, respect for God and Country, and so much more was shared from conception of an idea to execution.  And Jack truly shined when it did not go in his favor; he always encouraged each and every one of us to never quit, no matter what.  Jack’s motto was “give 110% and be proud of what you have to offer”.  Some of his activities included, Boy Scouts, The American Kennel Club, Dog Breeder of German Shepard’s (his travel companions on the road), Hempstead High School Football and so much more.

Jack was first and foremost though a devoted family man.  His military service protected the freedoms which would allow his family to grow and prosper, of which he encouraged all to never forget.  His natural abilities in construction made it possible for Jack to provide for his family as they grew, and in turn pass on his true grit work ethics for them to adopt in their own lives.  Jack’s determination to love and nurture them from his heart is what truly brought him joy.  He was united in marriage to his lovely wife, Nancy S. Sajdak, on June 3, 1978 in Chicago, IL.  They have been blessed with 41 wonderful years together, and today Jack’s children carry with them all of the lessons he relentlessly instilled within them through his words, thoughts and actions over the years.

His family was everything and thankfully he has left an abundance of memories which will bring some comfort in the days ahead.  Jack has now surrendered his earthly pilot’s license for an eternal one.  His project list is completed and peace is finally his after such a long battle.  We will never forget all of the good that the world has experienced because of you Paul “Jack” and we will wait patiently in quiet sorrow for the day when we can hear your voice once again.  God Speed Paul, God Speed Good Sir and God Bless.

Those left behind to cherish the memory of Paul include,

his loving wife of 41 years,

Paul was preceded in death by his parents; his son, Anthony “Tony” Papin; his sister, Roberta (Clough) Madigan; and his in-laws, David and Joan Sajdak.

Paul’s family would like to thank the nurses and staff at Hospice of Dubuque for all of their loving and professional care and support of Paul, and his family over the last 13 months.  May God bless you all for your compassion and kindness.

Online condolences may be shared with Paul’s family at www.tristatecremationcenter.com

To honor Jack’s life, a private family Celebration of Life will be held at the Tri-State Veterans Memorial Plaza at a later date.

Leave a Reply to Sharon and Mike Rettinger Cancel reply