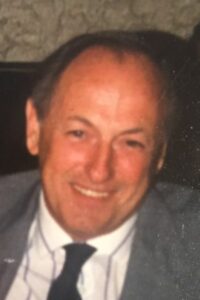 Robert “Bob” Anderson, age 84, of Cassville, Wisconsin, completed his earthly journey on March 4, 2021, at Mercy One in Dubuque. To honor Bob’s life, his Celebration of Life will be held at a later date. Burial will be in Alpena, Michigan, at a later date. The Tri-State Cremation Center is humbly serving Bob’s family.

Bob was born on December 9, 1936, in Alpena, Michigan, a son to Myrto and Olga (Jantz) Anderson. He grew up surrounded by family and friends and not only developed a strong work ethic in his early years, but also an astonishing athletic record. Bob was a proud member of the Alpena Sports Hall of Fame as he had earned 10 varsity letters in football, baseball, basketball, and track, and even maintained his long jump record for over 25 years. He carried his drive for winning over into the business world seamlessly as adulthood entered the equation. With his beautiful bride of 64 years, Charlene Frantz, at home cheering him on, Bob began his career with the Ben Franklin and Woolworth stores until he eventually attained his dream of owning his own business. Roberts Arts & Crafts in Addison, Illinois, was an undeniable success which thankfully allowed Bob to provide for his family and move into early retirement as well.  Searching for the tranquility of small-town life, Bob and Charlene moved to Cassville, Wisconsin, to enjoy the good life. Spending an afternoon in the timber cutting wood was just what the doctor ordered for this gentle and humble man. Bob embraced all that was good in this life and was beyond kind and generous with those around him. We are heart-broken today as we face the realization that Bob has been called home ahead of us, but we will thankfully find peace in the days ahead as we reflect on the abundance of memories he so diligently worked on creating. Thank you, Bob, for all of the love and lessons you shared throughout your 84 years among us, and may you have eternal peace, as we seek healing, until we meet again.

Those left behind to cherish the memory of Bob include,

Bob was preceded in death by his parents and his siblings, Hazen (Vern) Hibner, Milton Anderson, Donna Poirier and grandson Steven Thomas Anderson.

Bob’s family would like to thank Dr. Honorio Caceras, along with the nurses and staff at Mercy Hospital’s 4 th floor, for all of their professional and compassionate care of Bob, and his family.

Online condolences may be shared with Bob’s family at www.tristatecremationcenter.com