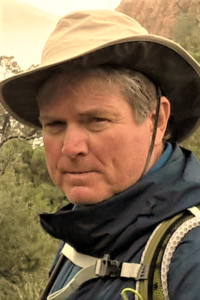 Robert Brainerd Hutchinson was born on September 24, 1951, and died peacefully at home in Hanover IL on December 10, 2021 after a long and valiant fight with cancer.  In honor of his wishes, there will be no formal ceremony and his ashes will be buried in the Casper Bluff Natural Cemetery, Galena, IL.

Robert was born in Los Angeles, CA. His family moved to New Zealand for several years before returning to live in New Jersey and finally settled in New York City.  He graduated Collegiate high school in Manhattan, before attending Reed College, finally graduating from Columbia University with an MA in Geology.

His true passion was the outdoors. He was never without hiking boots, running shoes, kayaking paddles and his beloved bicycles. He participated in several triathlons in New York State and Illinois.

While working for Brown Trout Publishing (CA), he wrote several books which ranged from a children’s book to a geological guide through the Grand Canyon.  He worked for Praeger Publishing (CT) as an acquisition’s editor until his retirement in 2016.

Robert will be missed by his many friends as a gentleman and a scholar.

The family would like to extend special thanks to the nurses and staff of Hospice of Dubuque. Their dedication and care carried us through this most difficult time.

Online condolences may be shared with Robert’s family at www.tristatecremationcenter.com

We would like to sincerely thank Jason at Tri-State Cremation Services for all his help.

In honor of his wishes, there will be no formal ceremony and his ashes will be buried in the Casper Bluff Natural Cemetery, Galena, IL.