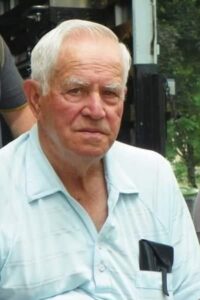 Robert (Bob) Eugene Henning, age 86, of Cascade, IA, completed his earthly journey on February 16, 2021, at home surrounded by his loving family.  To honor Bob’s life, his Celebration of Life will be held on Thursday, Feb. 25, 2021, from 4:00 until 6:00 p.m., at the Community Presbyterian Church, 216 Polk Street SE in Cascade, Iowa. Burial will be in the Cascade Township Cemetery.  The Tri-State Cremation Center is humbly serving Bob’s family.

Bob was born on April 15, 1934, in Kellogg, IA, a son to Albert and Minny (Redding) Henning. Bob was raised in the Newton, IA area where he would eventually meet the love of his life, Helen Lily Tutor.  The couple was united in marriage on March 14, 1953, and have been blessed with 67 wonderful years together and 5 children.

Bob retired after 36 loyal years as a cableman with AT&T. While working for AT&T Bob and his family moved all over the U.S. until they eventually settled down near Bernard, IA in December of 1969. Then in August of 2018 Bob and Helen moved into their final home in Cascade, IA.

In his free-time, Bob enjoyed hunting, fishing, Nascar, and playing cards with his friends. He was also an avid raccoon hunter, raised Redbone hunting dogs, and was a proud member of the Redbone Association for many years.

Those left behind to treasure the memories of Bob include,

plus many nieces and nephews.

Bob’s family would like to thank the nurses and staff at Hospice of Dubuque for all of their professional and compassionate care of Bob, and his family.

Online condolences for Bob’s family may be left at www.tristatecremationcenter.com.