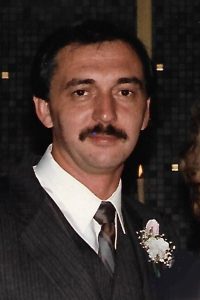 Rocky Tiefel passed from this life to the next on August 17, 2020, after a hard fought 3-year battle with Lung Cancer.  His family surrounded him.

To honor Rocky’s life, his memorial service will be held on Thursday, August 20, 2020, at 11:00 a.m. at the St. Peter Lutheran Church, 3200 Asbury Road in Dubuque, with Pastor Matthew Agee officiating.  Family and friends of Rocky’s may visit for one hour prior to the service at the church.  Burial will be in the Linwood Cemetery in Dubuque.

Rocky was born on March 23, 1948, he was the only son of Dale J and Evelyn A (Schroeder) Tiefel.  He attended St. Columbkille’s and graduated from Wahlert  high school.

After high school, Rocky spent a short time in the Navy Seabees.  In his younger years, he was an avid hunter and fisherman. He went any time he had the opportunity.

Rocky served as an Assistance Scoutmaster for Troop #22. One of his most memorable times was a trip to Phil Mont New Mexico with a group of scouts.  He helped many boys reach their Eagle Scout rank, including his son, Rob.

Later he enjoyed putzing around his garden and garage.   Feeding and watching the birds also became a real enjoyment to him.

Rocky was a volunteer and worked on the construction of the Dubuque Soccer Complex from its inception until after its opening and he took great pride in knowing that many families would have the opportunity to enjoy the complex in the future.

He was a carpenter by trade, working 31 years at MercyOne Hospital.  After Mercy, he spent another 10 years at Terrace Heights as a Maintenance Supervisor.  He retired in 2014

Rocky married Bonnie Winders on October 18, 1985, and together they raised four children; Sean, Mark, Rob and Jenny.   Rocky’s family meant everything to him.  He enjoyed hunting and fishing with his sons and watching his daughter play soccer all of the way through her college years. He was always a guiding hand in their lives.  Watching his children interact with their children proved especially satisfying to him.

His eight grandchildren made him happy and added a special joy to his life.   He delighted in teasing them at any chance he had and loved watching them play sports.  He was especially proud of Kaitlyn as she finished college this year, Lacy and Lauren as they enter their junior years in college, Emily for her spunk, Kobe for all of the help he has provided over the past few months, Tyler for giving him the opportunity to say “Run, Tyler, Run”, and Ashlyn and Alayna for their ability to tease Grandpa as much as he teased them.

Rocky was proceeded in death by his parents, Dale and Evelyn Tiefel (Dubuque); as well as his in-laws, Bob and Maryan Burdick (New Jersey) .

He is survived by his wife, Bonnie; his 4 children & 8 grandchildren, Sean & Cyndi Tiefel (Kaitlyn and Lacey Tiefel) of Colorado, Mark & Michele Tiefel (Lauren, Emily and Tyler Tiefel) of Marion, Rob Winders of Dubuque, and Jenny & Benji Meyer (Kobe, Ashlyn and Alayna Meyer) of Dubuque; his brother-in-law, Bob and Karen Burdick of New Jersey, and many cousins and great friends.

Our family would like to extend a special thanks to Dr. Honorio Caceras, Dr. Mark Janes, and Dr. Eric Engleman, as they fought hard for him during his battle.   Also, the nurses and Staff of the Oncology Department of Medical Associates, as well as Hospice of Dubuque for their constant support and compassion during the rough times.  They were always a comfort to both Rocky and his family.

Online condolences may be shared with Rocky’s family at www.tristatecremationcenter.com